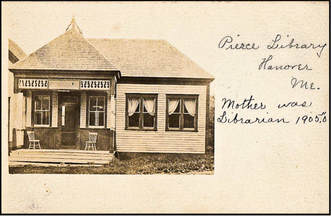 Since its inception in 1895, the Gardner Roberts Memorial Library has been dedicated to providing resources to the children and citizens of the town of Hanover, Maine.  The “Little Library”, a one-room structure built and owned by J. Gardner Roberts, originally served as the town’s Post Office where space was made available for a book lending corner.  When the Post Office moved to Russell’s Store on Main Street, Alfred Pierce of Lexington, Massachusetts offered to donate 100 volumes of books and 10 volumes a year for the next five years provided that the Library be named the Pierce Library.  His offer was accepted and in 1901 the library was incorporated with the first slate of officers which were all women.   Viola J Russell, the first librarian, was paid $10 a year – a fee that was also to be used for the cost of wood and lights!

​
​As space for additional books became in demand, Mr. Roberts provided funding to add a wing to the building in order to house the growing book collection.  When he died in 1924, the building and surrounding land were deeded by his heirs to the library corporation with the stipulation that the name be changed to the Gardner Roberts Memorial Library.  To this day, the “Little Library” continues to actively serve the Town of Hanover as it did over a century ago and proudly bears the name of its founder.
​
​Originally located at the bottom of Howard Pond Road, the Library    was moved in 2007 to its current location near the Town Office to make it more centrally located and to provide parking for patrons.  Ms Peggy Susbury, Librarian, has faithfully served the Library since 2007.  GRML has become the local hub of Hanover where neighbors and friends meet and where both adults and children enjoy the wide variety of books and partake in the various community activities. ​
​
The Gardner Roberts Memorial Library is a privately-held, independent, 501(c) 3 non-profit organization located in Hanover, Maine.  The Library collection includes recent releases, best sellers, a children’s section, books about Maine, antique volumes and the latest DVDs.